Standard Lithium CEO Robert Mintak stated, It was always our intention to do a physical ribbon cutting at the end of the commissioning stage but unfortunately that was not possible. The purpose of the virtual ribbon cutting is to highlight the efforts of individuals and teams that have brought the project to where we are today, an operating first-of-its-kind direct lithium extraction plant.
On behalf of LANXESS, our Board of Management and the Plastic Additives Business Unit I would like to congratulate Standard Lithium and especially the project team for the fantastic job you have done to this point, said Antonis Papadourakis, LANXESS Corp. President and CEO. We recently announced the formation of a group initiative for E-Mobility. We manufacture a number of specialty chemicals that modern battery systems cannot do without, such as phosphorous chemicals, hydrofluoric acid and flame retardants. As you could imagine, the commercial production of battery grade lithium, which is a key component in large scale lithium ion batteries, is also a crucial raw material for the desired expansion of Electric Mobility. Together with Standard Lithium we aim to use this demonstration plant to address this development and today we are one important step closer to realizing this goal.
Arkansas Governor Asa Hutchinson commented, In the two short years since Patty Cardin of LANXESS introduced me to the team of Andy Robinson and Robert Mintak of Standard Lithium, the company has moved from a big concept to building a working industrial scale demonstration plant for direct lithium extraction. This cutting-edge disruptive technology has the potential to put Arkansas on the global map for lithium, a critical mineral for the United States economy.
Senator John Boozman stated, Its certainly a pleasure for me to congratulate Standard Lithium as we celebrate the launch of operations in Arkansas. I admire the vision and persistence of company leaders who work so hard through the unique challenges we are facing today to become fully operational. Standard Lithiums investment will benefit the community, the region and the state of Arkansas.
Senator Tom Cotton commented, This is a cutting-edge project that could one day make America a leading producer of lithium and thats no small matter because the lithium produced by this plant will power the products of advanced industries from smart phones to electric cars.
Representative Bruce Westerman stated, Im very excited about this as well as everyone else should be because we are going to be making high quality lithium from Arkansas, a product that is in huge demand as we become more electrified around the world and in our country.
The first-of-its-kind in the world Direct Lithium Extraction plant is installed at the Companys project partner LANXESS South Plant facility near El Dorado, Arkansas. LiSTR is an environmentally friendly technology that selectively extracts lithium ions from tail brine that is a by-product of existing bromine production facilities run by LANXESS in south Arkansas. When compared to the conventional methods for recovering lithium from brine, the LiSTR process provides many benefits:
Planning for the projects phased commercial development with a target initial annual production of 20,900 tonnes of battery-quality lithium chemicals, roughly five times the current domestic production is currently underway.
Today, the U.S. represents less than 2% of global lithium production and no new lithium mine has been built in the United States in almost 60 years. A Trump administration executive order named lithium among 35 critical minerals for which the government wants to boost domestic production and reduce its heavy reliance on imports. U.S. imports of lithium have nearly doubled since 2014 due in part to rising demand from Tesla, SK Innovation Co and others building battery plants in the country, according to the U.S. Geological Survey.
About Standard Lithium Ltd.
Standard Lithium (TSXV: SLL) is an innovative technology and lithium development company. The companys flagship project is located in southern Arkansas, where it is engaged in the testing and proving of the commercial viability of lithium extraction from over 150,000 acres of permitted brine operations. The company has commissioned its first-of-a-kind industrial scale Direct Lithium Extraction Demonstration Plant at LANXESS South Plant facility in southern Arkansas. The Demonstration Plant utilizes the Companys proprietary LiSTR technology to selectively extract lithium from LANXESS tailbrine. The Demonstration Plant is being used for proof-of-concept and commercial feasibility studies. The scalable, environmentally friendly process eliminates the use of evaporation ponds, reduces processing time from months to hours and greatly increases the effective recovery of lithium. The company is also pursuing the resource development of over 30,000 acres of separate brine leases located in southwestern Arkansas and approximately 45,000 acres of mineral leases located in the Mojave Desert in San Bernardino County, California.
Standard Lithium is listed on the TSX Venture Exchange under the trading symbol SLL; quoted on the OTC - Nasdaq Intl Designation under the symbol STLHF; and on the Frankfurt Stock Exchange under the symbol S5L. Please visit the Companys website at www.standardlithium.com
Contact:
For further information, contact Robert Mintak, CEO, at (604) 259 2963
info@standardlithium.com
A photo accompanying this announcement is available at https://www.globenewswire.com/NewsRoom/AttachmentNg/a268724b-ba15-45c8-b7b9-721878fbff35 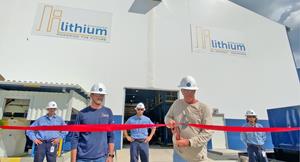